Prioritize your marketing campaigns and sequences

Send your marketing campaigns and sequences by priority level

Written by Jenna Chau
Updated over a week ago

When you have multiple marketing campaigns and/or sequences set up, it is important that you prioritize them to ensure that records are going into the correct campaign/sequence at the right time.

Because a record can only be in one campaign at a time, the level of priority is important in determining which campaign a record will go in if it meets the criteria for multiple campaigns. Invelo's marketing philosophy is that users should focus more energy on those records that are of higher quality than those that are of lower quality. Therefore, we recommend that your highest quality campaigns are in the first priority spot.

For example, imagine that you have two campaigns:

Campaign priority can be affected in a number of ways:

Campaign priority determines which campaign a prospect or lead will be entered into first, as well as which campaign the record may flow into once it has completed all the sequences from the first campaign.

To change the priority of a campaign, click and hold the icon under the Order column. Then drag and drop it to reprioritize.

You can determine how records flow within a specific marketing campaign under the Campaign Automations section within the Audience step when you create your campaign. 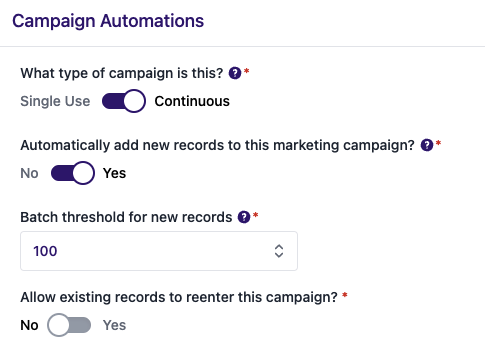 Sequence priority determines the order of marketing sequences that a prospect or lead will flow through within a specific marketing campaign.

To change the priority of a sequence, click and hold the icon under the Order column. Then drag and drop it to reprioritize.

Did this answer your question?